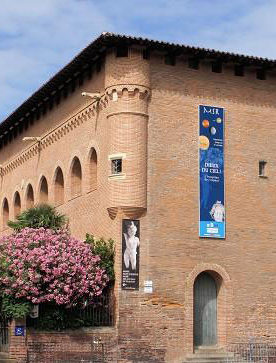 The musée Saint-Raymond (MSR), a museum run by the Mairie de Toulouse, is a cultural must see in Toulouse. Located in a classified heritage building in the historical center, it preserves and exhibits Mediterranean civilizations artefacts dating back to Antiquity.

On the 2nd floor, everyday objects, architectural elements, sculptures and models present Toulouse and its surroundings during Antiquity. The exhibition illustrates the many waves of settling and changes in the city from the Gaul era to the Roman era. The models give an understanding of the layout and key monuments of the Roman city (remparts, temple, Visigoth kings palace, La Daurade church) of which nothing remains ‘on the surface’ now. A group of sculptures discovered in Béziers (part of Toulouse’s administrative province) are also on display.
Challenges:
How can one make sense of incomplete artefacts?
How can one put these everyday objects in context?

The Chiragan’s Domain, discovered in Martres-Tolosane, is the most significant amongst all the known Roman’s villas throughout Gaul. The many farm and trade buildings found were part of a 25,000 m² residential complex dedicated to the comfort of its inhabitants. No other villa across Europe- besides Imperial villas such as Hadiran’s villa (Italy)- contained as many marble artefacts. This unique marble décor completed the mythological representation and portraits to illustrate the house restructuration at the end of the III Century.
Challenges:
How can one make sense of incomplete artefacts?
There are a lot of statues
How can one link what’s in the museum to its outside context?

Between 1994 and 1996, archeological digs under the basement of the museum building revealed about one hundred graves, some wall structure as well as the remains of a big oven space used to produce lime which in turn was used to make mortar. The oven remains are part of the museum’s permanent exhibition, so are some of the sarcophagus burials. In the main room, you can find some other sarcophagi that were sculpted for the first Christians. In the next room, some gravestones with engravings give a moving testimony of the Roman era people.
Challenges:
How can one put these everyday objects in context?
There are archeological remains from different periods next to each other
Artefacts and remains showing a societal change at the end of Antiquity
How can one link what’s in the museum to its outside context?

Tolosa in “narbonnaise”
On the 2nd floor, objects of daily life, elements of architecture, sculptures and models present Toulouse and its area during Antiquity. They explain the different stages of the city settlement from Gallic to Roman times. The models allow toreproduce urbanism and the most important monuments of the roman city (fortification, temple, palaces of Visigoths kings, the church of La Daurade) of which nothing remains in the actual city. The administrative province of attachement for Toulouse is also described, thanks to the sculpted group discovered in Beziers.
Issues:
How can we make understandable incomplete objects ?
How can we contextualize daily objects of life ?

The Chiragan domain
Discovered in Martres-Tolosane near Toulouse, Chriragan is the most important roman villa known in the whole Gaul. It is composed of many farming and