Before, the walls had ears and now they are talking! What if by chance, on your way to Lens, someone began to tell you about her favorite museum piece? This brick is bright and interactive : TOUCH IT! It will deliver the impressions of a visitor. Emotion, surprise or fun in front of a painting, a sculpture .... Let us surprise you ! Will the work be as you imagined ? It is for you to discover in the Galerie du Temps.

The brick is placed on the walls of the city, public or private places, where people live. Installation points are chosen to suggest a visual link between the city, the museum and the landscape. Some are located at eye level of adults, others at eye level of children or disabled . Made of glass , they are light , discreet , elegant and solid. Curious passers-by approaches and understands, thanks to the representation of a hand, they must touch the brick. Then it delivers a message of twenty seconds repressenting the emotion of a visitor of the Louvre -Lens in front of a work . Each brick has several testimonies of visitors, impressions collected in real situations. Records may have been reworked (edited, transcripted, etc. . ) .

Listening requires that the user is active . Indeed, when it stops to press the brick, it was . If the drives again , it delivers a new testimony.

During the Museomix experience, our interdisciplinary team worked on the relationship between the museum and its territory. The prototype is a model made within 3 days.

Our “bricks” ( iconic material of local architecture ) are thought to be installed in the streets of Lens. They are curious objects in the urban space , inviting you into the museum, day and night, outside the museum walls. When passing by and touching a brick, the journey begins. Each brick tells about a work with many voices.

The bricks are part of the public space. They make you aware of vistas from where you stand to elements of the urban landscape: the Louvre- Lens, the Terrils, the stadium…

Independent of each other , they take the form of a constellation in the city.

Or a path to a museum or an interpretive trail heritage of the city. Mur Mur is a sensory introduction to the Louvre –Lens.

The idea and the device is transferable to other sites, since its content can be adapted to the museum’s collection and the city in which it is located. It is a tool of cultural action; Mur Mur lets the museum enter the city. 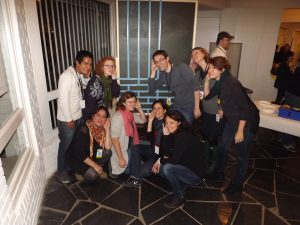