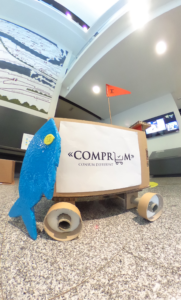 Try another kind of experience. Take your trolley and get deep in the roman-time commerce. Play, have fun, search, find and learn. Put together all the possible objects and at the end of the visit experience the trade. There is a surprise!

A segment of the audience that doesn’t have  actually any service from the museum. Kids from 18 months accompanied by adults. An autonomous visit non-guided visited that needs the participation of the adults to be done. It will bring with it interesting and fun dynamics between visitors.

The project came up after the guided tour of the museum. When we did the tour through the museum, we saw many “dead” spaces unused, that weren’t seen as usable spaces for the museum or the exhibition. Some areas had a lot of  potential for temporary uses, and could also give sense to a different internal tour. This way, the idea of causing this new uses creating a kid game came,  in a more fun  and agile way. We did the tour again analising it from a younger point of view and detailing little by little the message we wanted to give to this kid-segment. How to make them understand the information and the content of the museum in a more pleasant and actual way. We also thought about how to cause with this project a familiar  activity, a way of enjoying the tour together..

The idea kept building and we mix the concepts of fames, family and kids. We were interested by the idea of linking the ancient time with an actual time so that the message could arrive to the kids in a direct and natural way. Try to show them to read the past with a contemporray game/activity. This is how the idea of putting actual trolleys and the commerce.

PILARS OF THE PROJECT

I. To bring the Roman world closer to the younger public. Tackeling the distance of the exhibition with a game adapted to their dimension and height.

II. To create dynamics between kids and adults, to bring it later to the outside.

III. Give strength to the idea of local commerce, reinforcing the economy the area. (Future line of action in collaboration with local commerces, it’s mandatory to create social network and communication in Irun)

IV. Get to know the trade in a fun way. Bring fun and happiness to the museum, to get rid of the cold, academic and institutional image of the building.

I. Information brochures with the mentioned speech. And the “shopping list”.

II. Trolleys and bags. Mini-showcases to expose the objects and the same objects (with a toy-look, to look more attractive).

III. Game. Work on structuring well the game to create links between the roman time and the museum’s exhibition. Both for esthethic design and latin words for the showcases and the shopping list.

IV. Without needing a person in charge of the game, in the same museum’s reception area, place a departing point where the kids will do the trade at the end of the visit. Depending on the objects they manage to take during the visit, they’ll be rewarded with a toy they could bring home.

The museum’s hall has already multiple functions, and the trolleys take some space, so the stand for the trolleys will be located in the first floor. After the first ramp, before getting into the exhibition part, we could place this space. The information brochure and the shopping list with the game key-points will me in this same space too. The small showcases or the boxes that keep the pieces, will be located in order to the original museum showcases, in a way that they don’t bother the visitor. In spaces like the empty spaces below the showcases (actually too high for the young public).

I. Investigate the participation ways. Transmission from adults to kids and the perception of the visit & the museum.

II. Study the smoothness  of the tour with the trolleys. The ocupation of the space from the kids. The relationship with other kind of public.

III. To open the museum to interpretation and reflection from the kids. Even the ones that cannot read the panels and explanations of the exhibition, and get to light their fire.

IV. Bridge between new channels in Irun. Possible projects with local commerce and new profiles, unknown until know to the museuistic world. New links with the experience of the trade.

We created digitally the logo for COMPRUM, some panels to instal where the trolleys are going to be located and the showcases of the products.

We did a prototype of the trolley with cardboard .

The three teammates feel this as a pleasant experience, very inspiring and enriching. The teams were made in an spontaneous way and all participated intensly and motivated. The ideas that came were very attractive and util for the museum. The synergies created during the 3 days of Museumix were something special and totally recommendable.

We are a team of three small people from France, Mallorca and the Basque Country. Each of us has a different background and has a different perspective of things. But, as museomixers, we’ve understood each other since the beggining, each of us bringing more energy from its profile but supporting the rest of ideas. We surely are not going to be know for being the creators od the secret Coca-cola recipe, but yes we are going to be the three nice museomixers that choose COMPRUM, a new way of consuming.