It’s in the bag 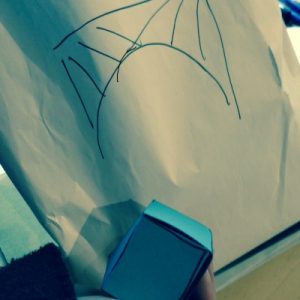 We are creating a family-friendly participatory game which helps visitors look at museum objects in new, creative, (and even unusual) ways. One team member finds an object from a picture on a card, learns a fact about it, then rolls the dice to find out whether they'll convey this answer to the rest of their team through acting, drawing, making a play-dough model or describing it without using certain words!

We’ll be using the Coalbrookdale Museum of Iron as a backdrop for a creative and participatory game designed for families. Families will use our game-bag full of cards and challenges to discover objects and then act out, draw, model, discuss and possibly even curate them as a group.  We hope to create more family-friendly opportunities within the space by giving families the tools to create their own experiences and learn from the existing exhibits in new ways.

Check out our idea in action.

and now a new iteration!

The museum is usually quiet, apart from the sound of autoplaying videos in the background, and a typical visit involves a lot of reading of text panels, or skimming through the exhibits fairly quickly.

Playing the game – which involves objects on all three floors of the Museum of Iron – gives families the chance to speak at a normal volume, perform, make playdough models, draw, and hopefully laugh out loud – not typical behaviour in this museum!

Families will have to find certain objects in the museum, many of which are touchable, look at them in detail and physically or creatively convey an aspect of how the objects would be used.

We hope the physicality of these challenges will engage all the senses in a memorable way.

– Facilitate families creating their own experiences within the existing galleries

We initially wanted to make a Quaker trading game, Three Iron Ladies, using the diaries of the three “petticoat period” women who had run the Coalbrookdale Company with great success between 1796 and 1803, but were subsequently written out of Ironbridge history.

When we came to do research, we found that the 3 women business managers, and the 3 women who kept detailed diaries, were not the same women. There was no primary evidence and insufficient secondary evidence to build a game around. We also realised that we had nowhere near enough knowledge of how Quakerism affected decision-making to be able to devise a trading game that would represent people’s beliefs fairly while also being an enjoyable challenge.

We spoke with museum representatives about their aims for their main audiences, and identified families as a possible key target group (we didn’t have enough expertise to come up with a National Curriculum-compliant resource for schools in the time available, and were keen not to be too restricitve).

We brainstormed different types of board game, and thought about “Cranium” in particular. We then walked through the museum again, selecting interesting objects that could be interpreted in a range of different creative ways.

We devised a game involving questions and dice-rolling, worked out how player teams would progress through the museum and what equipment would have to go in the backpacks. We were inspired by this extensive resource from the V&A about best practice in creating family activity bags, and also by an interview we carried out with another Museomix participant who has experience creating activity backpacks for many National Trust properties.

The name of the game

Our initial game title fused museums and Cranium – Museanium. This was hard for people to pronounce so we tried Muzanium, which had resonances with “zany”. When we asked 10 people what they thought, however, they still couldn’t pronounce it and thought it sounded American or Polish. We crowdsourced suggestions on Twitter, and eventually settled on “It’s In The Bag.”

Delays on confirming the project name meant delays to designing the logo and branding assets, which in turn meant delays to creating a prototype bag – as we’d have to screenprint our design onto the fabric first, then cut it out, then sew it together.

Our design expert Abbie designed a logo and assets ready to print on the bag and laid out the question cards. Our logo includes the Iron Bridge, the title It’s in the Bag, and two brackets either side that could also be seen as representing the straps of the backpack.

In future, this suite of design assets could be used to create marketing postcards, posters, flyers, extra badges, completion certificates, other bags for sale, and a wider range of products and signage that could be useful around the museum and the World Heritage Site.

We asked on Twitter if anyone had any playdough recipes. When we saw how complex they were, we asked for Playdoh in pots, and it turned out that one of the Museomix coaches saw our call for help on Twitter and had 4 pots in his car. Working with this limitation, we decided to try to complete 4 activity backpacks to test on the Sunday afternoon.

We mocked up versions of our questions on corrugated cardboard, and together we tested two of the questions in the museum with a family. They were one of only two families in the museum, and the only one to agree to try the questions. We realised that we had to make the gameplay mechanic simple, and include more challenging questions for adults, and easier ones for kids – although these could spin off from the same objects.

Challenges we faced included technology limitations: we had difficulties in connecting our Mac laptops to the Windows PC that ran the only paper printer. We couldn’t transfer files on memory sticks, or open our Google Docs on this PC.

We also found that screenprinting would not be possible due to missing parts. However, we found that we could burn our design into the bag fabric using a laser cutter, which left a historical, rusty, sepia coloured print which also smelled industrial – like rust and burning. This was unexpected, but we’ll be inviting our visitors to smell the bags as well as using the contents!

A lack of yellow ink in the printer meant that we had to quickly redesign our coloured badges to make them heritage brown and white, and badge-making supplies were running very low so we also had to make the minimum possible number of badges. We were also only able to create completion prize badges for the winner in each family, whereas with more supplies we’d like to make badges for every family member who successfully gets to the end of the game.

A bit about Meaning Making – the museology theory behind the game

One of Museomix’s challenges this weekend has been to create content or a story. As a team which had to reboot half way through the day we are asking the visitor to create their own content.  Obvious benefits include reduced time for us to create a story, however it is based on solid theory! Meaning making is the phrase museum people use for the stories and connections made by visitors, independently.  Labels and interpretation may or may not be read, each visitor brings a life of experiences, education and opinion to their viewing an object and the conclusions they reach are their making of meanings. Our game  encourages such behaviour and is in no way a cop-out of the project deliverables!

Dice: wood, laser cutter (to such a fine tolerance that no glue is needed!)

After finding out that our initial idea was not possible and dealing with our own disappointment and the disappointment of the many enthusiastic people who were cheering us on, we regrouped around the only lasting fragment of our pitch: the idea of a game.  Enter: several hours of circular discussion around content, aims, mechanisms, and a list of every game we could think of… and then, cut to: an idea just in time for some museum reccy and dinner!

By 8:00 we not only had the makings of an idea, but 41 seconds of video of that idea in action!

We couldn’t get any developers to join our team, so took advantage of this to make a thoughtful physical experience game which wouldn’t have an online or technical element – meaning that it should be slightly simpler with fewer things that could go wrong. This would also enable us to all work on an aspect of the project all the time, rather than having to wait for someone to solve technical or coding problems.

We were also keen to be as inclusive of a wide range of audiences as possible – not everyone has a smartphone, and physical tools are quick to make, have an enjoyably tactile element for children, relatively durable yet also simple and cheap to replace. (e.g.rather than using a smartphone roll-the-dice app, which would be dependent on battery life and not dropping the phone, we wanted to make an oversize plywood dice that could be thrown and dropped without breaking or damaging any surface it landed on).

Of course, if the museum decides they’d like to include an online element this could be added in at a later date. We’ve included a hashtag so if any families want to tweet photos of the fun they’re having, the museum can collate this feedback – but it’s not an integral part of playing the game.

If the museum has more time, they could also glue and sand the dice, improve the lanyards, iterate the questions and challenges following further user testing. The question cards should also be laminated to be wipe-clean and long lasting.

One big challenge is that the 4 pots of Playdoh we’re using for today (Sunday) will have to be returned to the Imperial War Museum at the end of Museomix. The museum will need to source replacements for the rest of this week, although we spoke to museum manager Traci Dix-Williams who is able to order more from a school supplier. Could Playdoh potentially sponsor the bags?

It has occasionally proved difficult to balance the amount of time we needed to spend actually making our stuff with the amount of time taken by coaching discussions and Museomix debriefs, as well as the amount of time spent documenting the process. Much of this website content was created at home overnight, and we’re all now pretty shattered! However, we’re only a team of 4 and if we’d been able to bring 6 people together on the project, we would have been able to delegate these tasks more widely. 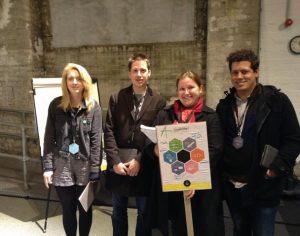